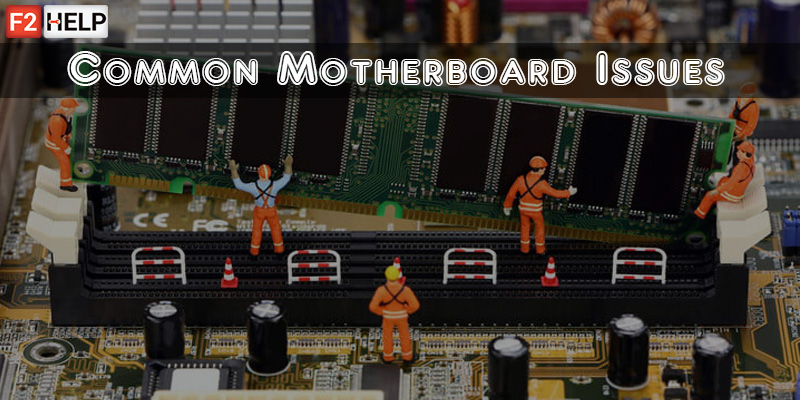 Learn How to Fix Motherboard Issues: Full Diagnosis and Fixes

Considered to be the brain of the computer, the motherboard is the most critical part of the machine. A motherboard consists of a number of parts which includes the processor, CPU fan, RAM to name a few. The motherboard is one of the most dreaded components of your system. Because it supports so many hardware components. Therefore, any common motherboard problems can empty your pockets giving you difficult times. If you are a tech enthusiast and are well-versed with the computer, then you may want to take a look at some fixes which can solve your problem. We will move forward stepwise. So, at first, we shall take a look at the motherboard failure causes and then discuss its solutions. Check our Hardware Installation And Troubleshooting Services.

Have a Look at the Common Motherboard Problem Symptoms

Common motherboard problems display early signs that notify the user when a computer is not working fine. These early signs are listed below.

The motherboard is considered to be one of the toughest electronic parts to diagnose in the tech world. As the component is itself complicated, therefore it is very time-consuming and can be very expensive at the same time. Moreover, most of the time, you cannot expect early warnings of the common motherboard problems. So, either you have to replace a hardware component or take assistance from the techies and in severe cases, replace the motherboard entirely.

In this context, we shall list a few reasons for the motherboard problems:

Motherboards do not contain just one power connection but two. There are two connectors, one is a 20-to-24 pin connector, and the other is a 4-pin connector which is hidden from the processor socket. In some devices, this 4-pin can become 8-pin where overclocking is possible. Hence, you need to verify that both the docs are in use. Check that both plugs are appropriately plugged and are correctly paired with the right power supply cords.

Inappropriately fixed components can lead to malfunctioning of the motherboard. In extreme cases, your system may not even get through the Power-on self-test which is imposed during the boot-up. The accused of this are the processor, video card and the RAM. Incorrect installation of the video card and the RAM are also responsible for your common motherboard problems. So, if you have the necessary tools near your hand, then you can open up your CPU and check if the video card is seated correctly or not.

Also, never forget to check the arrangement of the RAM. The RAM must be standing upright 90 degrees on the motherboard’s surface. Therefore, if any side of the RAM is slightly bent, then the RAM will not work correctly. An improperly installed processor is much more difficult to diagnose, yet you must check it at least once. See that the pins and the slot on the processor are appropriately lined. And when the processor is inserted at once, then it must be seated flat on the socket’s surface.

A lot of capacitors are present on the motherboard, and the power flows from one part of the motherboard to the other. You must have noticed that the motherboard hangs loosely from the CPU with the aid of a few screws that are more or less quarter-inch thick. So, if your motherboard comes into contact with any other metallic components, then a short-circuit can take place at any moment. Check the placement of your motherboard and also check that it is full-proof with either a rubber or plastic exterior.

The power button is an important parameter that connects your motherboard through a small two-pin wire. If the wire is not connected with the correct pins, then your motherboard won’t turn on even if you press the power button. The connectors are only labeled with plus and minus signs; so attaching the power cables can be a bit difficult to carry out. Check out the motherboard’s manual to fix this issue and make sure where the power button connector goes. If you do not possess the manual at the moment, then you must visit the company website and find out the PDF version of such.

The motherboard comes with pre-installed BIOS utility configurations and is ready to handle modern hardware. However, it is not guaranteed to work even if new processors are fitted to the motherboard. In such cases, your system may not be able to go through the POST and will also refuse to restart. You can visit the manufacturer’s website and search for the latest BIOS/UEFI version and try to install new hardware configurations for such.

Diagnose the following hardware components and find out the real cause for receiving hardware issues.

Hard disks are the first to malfunction and are one of the early signs of motherboard problem symptoms. Examine whether your files are taking too long to transfer or if the time required to boot your system is too long. Besides these symptoms, if you are hearing loud whining sounds, then you have a high chance of encountering motherboard problems. Execute driver utilities in Windows using the drive’s manufacturer.

Errors with the video will get garbled and will be unstable at the same moment if you meet common motherboard problems. You need to test your video driver and do troubleshooting on it.

Memory is another victim of motherboard problem symptoms. Run a diagnostic utility tool for further testing and check if the system becomes stable after that.

The processor has very less to do with common motherboard problems. However, it can be a reason for system instability. Check which company’s processor you are using and run diagnostic utilities of that processor.

A BIOS update can work like a charm and resolve many of your common motherboard problems. Many people have reported that it removes the instability of the motherboard and fixes any bugs present in it. Check Computer Repair Dubai for extra help.

It has also been observed that improper cooling of your system can cause this problem. Open the CPU and pull out the motherboard from the system and check the seating arrangements of the system components that are present on the motherboard. Some manufacturers provide BIOS utilities as software which can be opened from the system without the requirement of opening your CPU. There, you can check the functioning of the components and can even find out the current temperature inside the CPU. Thus, you will be able to view any anomalies with the fan or other parts.

It is also likely that your system may not start after getting affected by any one of the common motherboard problems. If that is the case, then you need to carry out a visual check on your CPU and find out the cause of the problem at the earliest then go to nearby motherboard repair center.